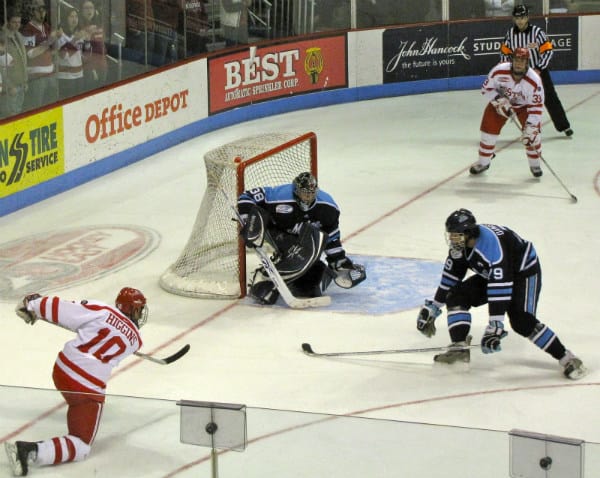 2 on 1’s are naturally a tough situation for defensemen, and they are a likely source for a goal against. In minor hockey, I was always taught to take away the pass and give the goalie the shot. After playing thousands of 2 on 1’s over the years (in practices and games), I’ve come to realise this is bad advice. If you think about it, why would you sit back and allow the other team to have a quality scoring chance? Since the defenseman is outmanned, it’s not realistic to expect him/her to be able to take away the scoring chance completely. That is why the goal of a 2 on 1 for a defenseman should be to minimize the quality of the scoring chance. And believe me, the way to do that is not to take away the pass every time. So how should defensemen limit the quality of the scoring chance on a 2 on 1? There are a number of things to consider but some are more difficult to apply than others so I will break this up into basic and advanced sections. The basic section can be applied by almost all skill levels but the advanced should only be applied by higher level players.

The reason it is easier for a shooter to score from the inside rather than the outside is that the opening of the net actually gets smaller at an angle. If you take this concept to the extreme and look at how much net is open from the goal line, there will be none. Please refer to the figure below for an illustration of this concept.

So if we keep this in mind, defensemen need to evaluate whether the puck carrier is on their forehand or backhand. If the puck carrier is on their forehand, defensemen should take away the pass and allow the shot because a pass from the forehand is quick and accurate and has a high probability of success. Additionally, the outside position of the shot reduces the net opening and makes it easier for the goalie to make a save.

Now, as is usually the case, there are exceptions to every rule. It gets more difficult when you consider the relative skill of the attacking players. This is a difficult concept to grasp since it means the player must get to know each of the players of the opposing team and understand their strengths and weaknesses. That is why this is an advanced method and should only be put into practice by higher level players.

Defenders should not allow the other team’s top scorer to be shooting in this position, it is preferable to let less skilled players shoot. Just think about it, who would you rather give a chance to score, Sydney Crosby or Brian Boyle? I don’t think anyone would pick Sydney Crosby.

Because of this, there are a few additional rules to apply:

Putting all of this together, there are four situations and two possible courses of action for a defenseman:

Any defenseman who puts these simple rules into action will see an improvement in their success rate at defending 2 on 1’s simply because the scoring chance was minimized as much as possible. It will take some practice to make these reads on the fly but it will certainly be worth it. Remember that preventing a goal is just as valuable as scoring one.